Please welcome Debbie Kump to my blog today, she is here to talk about her Apocalyptic Thriller '7G'. Debbie has several books in print, the covers of which are visible below her post. She has also been kind enough to allow us to do a giveaway. See the bottom of this post for more details.

Cursive is a dying art. Will handwriting be next? With text messaging commonplace and laptop computers becoming more and more integrated into the classroom, will students eventually stop needing the skills to actually write at all? And with Smartphones readily linking to the Internet and mobile telecommunications upgrades from 3G to 4G Networks, what else will the future hold? Will WiFi be everywhere, effectively eliminating the need for cell phone towers?
My Apocalyptic Thriller, 7G, takes a leap into this fictitious futuristic world. My husband has always been a bit of a futurist. He’d often share his technological ideas for the future with me…then a few years later we’d laugh when we saw his idea come true. Several years ago (before the Smartphone and ebook boom) he proposed the idea of hands-free telecommunications. Instead of mobile phones and computer monitors, users could text, surf the Internet, or read an ebook on lenses worn directly over the pupil. The possibilities for these multi-purpose lenses seemed endless: from e-libraries to dream uploads and instant language translations, all accessible with the blink of an eye.
That’s when my imagination snatched hold of his spark and took off. Instead of carrying Smartphones, users would wear contact lens-sized, extended wear, virtual computer screen and keyboard eye DOTS. With body heat as the sole catalyst required to power the endothermic chemical reaction recharging each battery, both military and civilians alike constantly wear these Digital Optic/Ophthalmic Transmitters (collectively referred to as “DOTS”) and “MUDE” Mobile Uplink Digital Equipment. Using ear DOTS, babies could piggyback off their parents’ MUDEs to listen to soothing melodies. Or dog owners could eliminate unwanted behaviors by using DOTS for bark control and invisible fencing like electronic collars do today.
This plethora of ideas soon wove itself into a multi-faceted novel, exploring the varied uses of the technology through multiple protagonists and interwoven subplots. I set 7G in the near future, at a time when Smartphones will be obsolete. With the upcoming conversion to 7G Network allowing instantaneous optical and audio recording, limitless military and civilian applications abound. Yet an unexpected programming glitch proves fatal, spelling disaster for the nation. In the aftermath of 7G, the fates of college sophomore Erik Weber and submariner Alyssa Kensington entwine. Will they escape and manage to survive in a crippled world?
While editing my manuscript for 7G on a flight to my parents’ house over the Christmas holidays, my husband whipped out the SkyMall magazine, pointing to a pair of glasses that provided a GPS digital reading of the wearer’s location.
I blinked, studying the glasses again. A chill ran down my spine.
“Freaky,” I told him, my pen poised over a scene where compulsive gamers developed eye shakes when their pupils rapidly flitted back and forth to reach the desired keys on their virtual keyboard eye DOTS.
Then a few days later as my husband perused Eoin Colfer’s Artemis Fowl: The Atlantis Complex, he paused to have me read a paragraph. In this selection, a centaur named Foaly placed a monocle over one eye to interface with a virtual system through a series of blinks and winks rather than using hardwired equipment.
Barely believing my eyes, I read the paragraph a second time, wondering when will this type of technology no longer be a work of fiction? Will a time come when all information is easily accessible on contact lenses like the eye DOTS from 7G?
With an increasing number of technological inventions entering the marketplace, that time may arrive sooner than we think…and hopefully will end better than my world does in 7G.

Other title available by Debbie Kump.

For more information, please visit her website: http://sites.google.com/site/debbiekumpbooks/
or find her on Facebook: http://www.facebook.com/pages/Debbie-Kump-Author/106841479415271
and Amazon: http://www.amazon.com/-/e/B005GX31CU 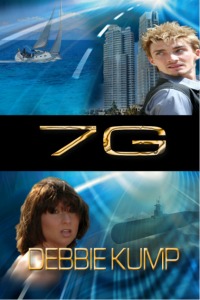 7G
In the near future, Smartphones will be obsolete. Instead, technological innovations provide virtual computer screens for texting, surfing the Internet, or reading an ebook on lenses worn directly over the eye.
With the upcoming conversion to 7G Network allowing instantaneous optical and audio recording, limitless military and civilian applications abound. Yet an unexpected programming glitch proves fatal, spelling disaster for the nation. In the aftermath of 7G,
the fates of college sophomore Erik Weber and submariner Alyssa Kensington entwine.
Will they escape and manage to survive in a crippled world?

Author Bio:
After graduating from Cornell University with degrees in Biology and Education, Debbie Kump taught middle and high school science in Maui, Seattle, and the Twin Cities and worked as a marine naturalist aboard a whale watch and snorkel cruise. Debbie lives in Minnesota,  U.S.A. with her husband, two sons, and three Siberian huskies. She especially enjoys writing early each morning; teaching; coaching youth soccer, hockey, lacrosse, and baseball; and dogsledding her kids to school.