I’m seeing a lot of posts on here with regards to gay and lesbian marriages. Some support the idea and some don’t. Well here’s MY view. And if anyone wants to argue with me about it.... bring it on!

Why do other people get to decided whether gay and lesbian couples are allowed to be happy or not? What right do you have to do this? Are you happy? Are you married to the PERSON YOU LOVE??? I bet you are. Would you have liked someone to turn around and tell you couldn’t marry your husband or wife, simply because some empty headed arsehole (who has no effect on your life, and probably doesn’t even know you) said nah, sorry, don’t like the idea???

Some are saying, they cannot marry because they cannot reproduce!
So my question is, do you only get married to have kids? It’s that all marriage is for? I don’t think so, you get married because you love the person you are with. Regardless of age, sex, colour or creed. You marry them because they own your heart. Not just so you can have children. Heterosexual couples can’t always reproduce. Will you forbid them from getting married? Will everyone have to have fertility tests before they walk down the aisle? I think not. So that stance is a load of bollocks really isn’t it.

Other are saying it’s against God!
Hang on a chuffing minute. Maybe it’s against YOUR God, but NOT everyone’s. You allow people to have their own belief systems don’t you? So why can’t people get married just because they are the same sex and it goes against yours. It doesn’t go against THEIRS! Maybe some people who walk this earth just want to PLAY GOD! So again. Fuck off.

I have my own beliefs. My beliefs would see arrogant, heartless and nasty scum bags like the people opposing others happiness ROT IN HELL! How does that make you feel?

This world is a hard one to live in. Everyone deserves the right to have some happiness in their lives. What right does anyone have to challenge that?! Everyone bleeds red blood, we are all human beings. So everyone should be treated equally. 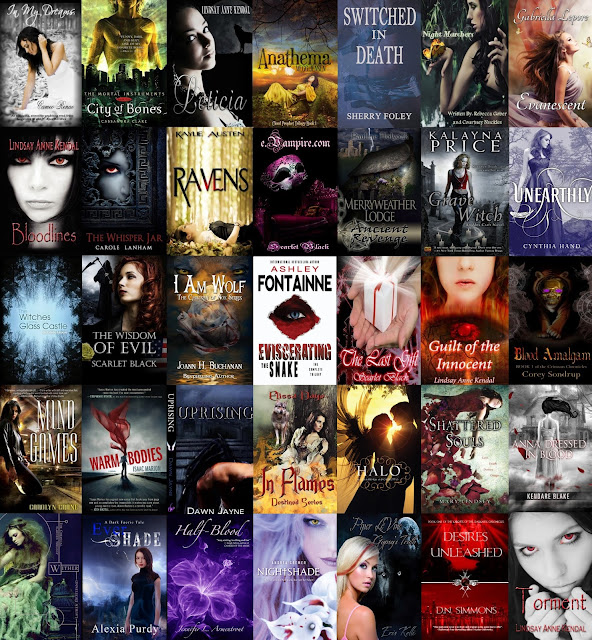 Just a quick pic of some of the books I've either read and really enjoyed, or ones I REALLY want to read! Just thought I'd do something different!
Posted by Unknown at 23:20 No comments:

I know, I know, it wasn't too long ago that I decided to re-vamp my blog. The truth is, I get bored very easily. So I decided to dress it up again. I've created a new banner. It took me a while, but I think the girls represent my characters really well. The blog background - I just thought it fit perfectly!

I hope everyone likes it. I'll also be adding some new pages very soon, so stay tuned!
Have a great week,
Love and Hugs!
Posted by Unknown at 14:42 2 comments: